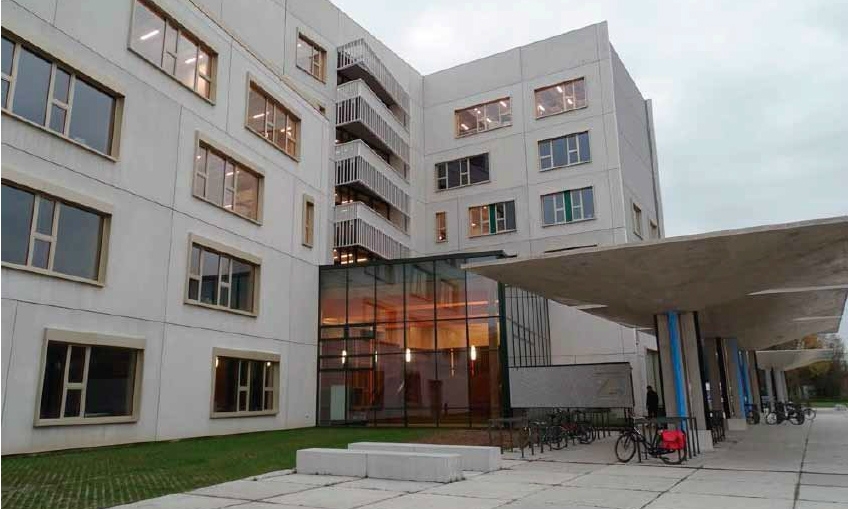 If you let a team of budding electrical and civil engineers automate their own new building, you can expect an innovative and technically-sophisticated solution. The University of Antwerp in Belgium has followed this path at its Groenenborger campus with the “Z” building. The result is a highly sustainable “passive house” with an intelligent building management system that features advanced HVAC control. As the central building automation platform, a Beckhoff CX2020 Embedded PC controls approximately 4,000 I/O points. Moreover, the openness of the PC-based control architecture enables budding engineers to use the building as a “Real Life Lab”

sustainability are accorded significant importance in the Electromechanics Engineering and Architecture degree programs at the University of Antwerp. It was therefore only natural that the Faculty of Applied Engineering Sciences would implement an innovative and energy-efficient concept in the construction of the new “Z” building. Leveraging excellent thermal insulation and the use of heat exchangers to avoid ventilation heat losses, the building is constructed as a passive house according to European standards and requires no traditional building heating. An unusual aspect in the design is that the building services were installed visibly for the most part, so that the building can serve both as an object to study and for student research projects.

The system integrator Fixsus, which implemented the building automation technology, will also use the data collected in the “Z” building for further system optimizations to be used in future projects. “For example, we use the data to further improve the control systems and the algorithms in the software we 15 | Published in PC Control 02 | 2017 worldwide | belgium develop,” explains Koen Verschuere, managing director of Fixsus. To achieve this, all measured values in the building – over 1,500 of them – are recorded every three seconds for a period of ten years.

Passive house principle plus integrated building automation maximize energy savings “In the past, we conducted research projects on the subject of climatization in which we asked ourselves, ‘How can comfort and low energy consumption be balanced efficiently while also considering

the investment costs?’” says Eddy Janssen, lecturer and spokesman of the Energy Department at the University of Antwerp. “As numerous simulations have shown, the concept of controlling each room separately with a variable throughput that depends on the measured values is best suited to achieve our goals.” This principle has been successfully implemented in the “Z” building on the Groenenborger campus, which opened in June 2016.

However, the room automation as realized is significantly more extensive: it includes illumination and solar protection, opening of windows and the ventilation, as well as heating and cooling.

The scope of functionality also includes heat storage and natural cooling byopening windows. “The controller is decisive for the passive house principle,” adds Prof. Ivan Verhaert. “For example, if you wish to make maximum use of natural cooling by opening the windows, increased air throughput must be achieved in extreme cases, even while the impulse fans are switched off. For the heating, internal heat gains in a room are best utilized by having the controller calculate them in advance.”

The fact that the building contains a great deal of heating and cooling technology makes the control requirements even more complicated. Apart from two classic gas boilers for absorbing the peaks, the system can make use of a 6-pipe heat pump, a

Translated to the cooling of a building, this means: first, heating up of the building is avoided by solar protection and the economical use of illumination; then, the cooler night air is used for air conditioning, for example; the next step is heat recovery and so on.

Individual room control provides high level of comfort A Beckhoff CX2020 Embedded PC serves as the central intelligence for the building automation. “The concept of decentralized intelligence no longer exists in the Fixsus philosophy. This means that the entire system logic is bundled in the central controller. The CPU is connected via EtherCAT with 89 decentralized I/O stations – one per room – with more than 700 I/O modules in total,” explains Tim Verheyden from Fixus. The number of measurements is significantly larger, however. Various measured values are recorded from each room, such as temperature, relative humidity, CO2 content, the concentration of volatile organic compounds (VOCs), CO value, light intensity as well as the intensity of infrared radiation. The measurement of the latter even enables system calculations for the perceived room temperature – an important variable to achieve the appropriate control for a high degree of comfort.

All measured values required for the climatization of the room are collected in the TP10 module as developed by Fixsus. The compact device, which is about the size of a light switch, contains 10 sensor keys that can be freely programmed by the user. “The TP10 is connected to a digital input and a digital output of the PLC, through which a value can be queried from the 512 registers of the TP10 every 0.2 seconds. You need fast I/Os for that – but of course that’s no problem with Beckhoff,” explains Koen Verschuere. “If a device should fail, it can be easily replaced without having to adjust anything in the programming or configuration.” Maximum flexibility and system openness “Closed systems are still frequently used in building automation, which can lead to problems especially when components must be replaced,” says Johny Vangeel, Business Manager of Building Automation, Infrastructure, Energy at Beckhoff. “With the building automation system from Beckhoff, we can replace or add components while the application is active in operation. The fact that all the logic is located in the PLC gives the system maximum flexibility when making adjustments and extensions in the periphery.” A typical problem in traditional building management systems is, for example, that the software for monitoring and data management runs on a separate PC.

Sooner or later conflicts arise between hardware and software components, for example, when new versions no longer communicate with old systems.

“With the PC-based controller from Beckhoff, this all takes place on the same CPU and new developments in hardware have no effect on the software,” noted Vangeel.

Another advantage of the open system is that users can adapt the software themselves. A conventional facility manager has to contact the system integrator that supplied the system to make changes. However, it’s an entirely different matter if the users are professors and students specialized in climatization and building management. Projects are now planned regularly in the Engineering courses at the University of Antwerp, in which measured values from the university’s own building are used, or new algorithms are tested on the controller. Every control loop can be bypassed for this and replaced with a manual operation or a new software module. The complete building controller is stored on a memory card, so it is simple to exchange the card afterwards to restore the original operating conditions if needed. “There is a lot of talk about sustainability in building management, but one aspect that is frequently forgotten is that a system is only sustainable if it is reproducible and usable on a large scale,” says Eddy Janssen. “A system must also be able to grow with new requirements and findings. This is an important criterion for us and was decisive in our selection of the PC-based automation solution with Fixsus.”