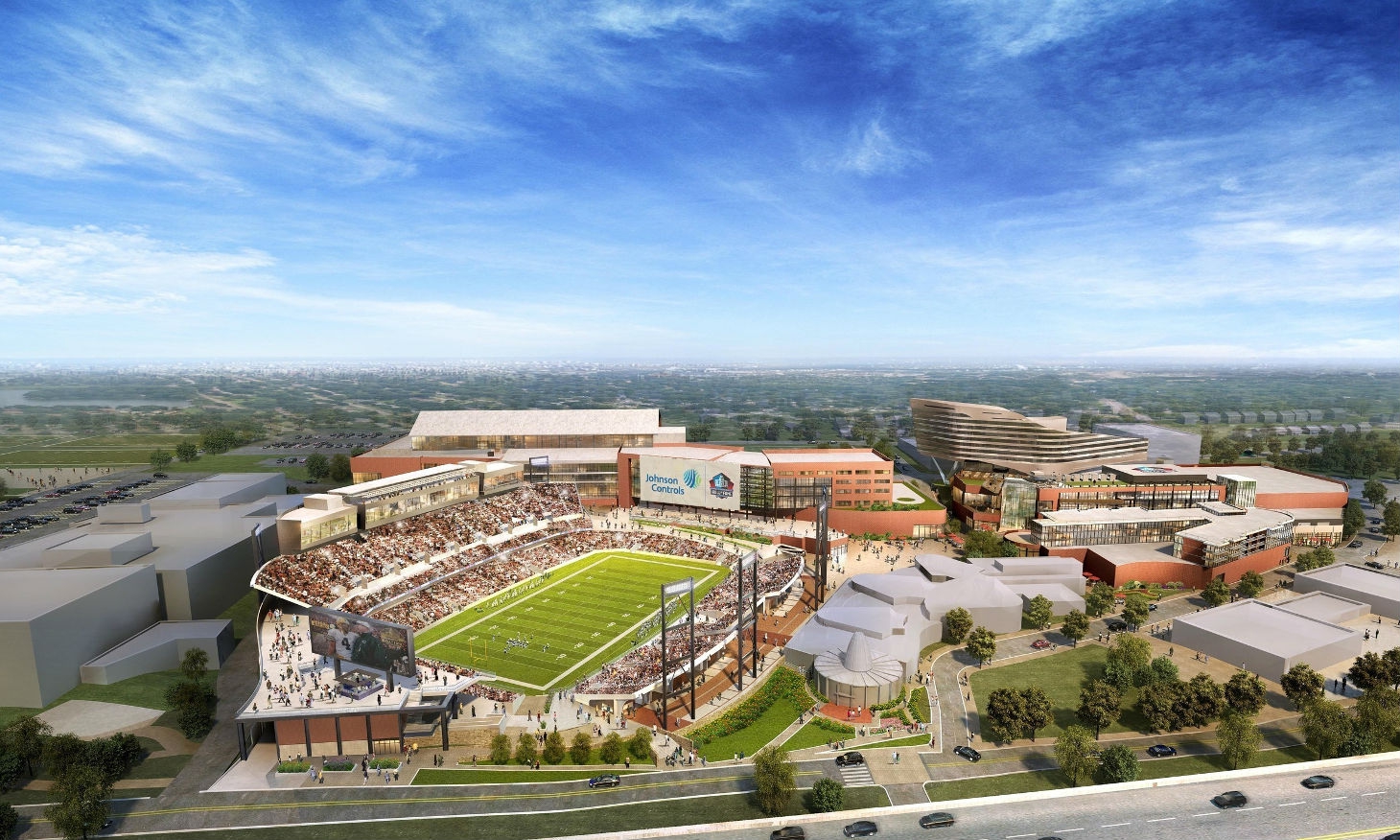 "This is an extraordinary partnership between esteemed partners that celebrates excellence everywhere. Johnson Controls and the Hall of Fame share strong values and a vision of improving others' lives and making the world a better place," Pro Football Hall of Fame President David Baker stated. "This historic agreement will ensure that the Johnson Controls Hall of Fame Village will be the first 'smart' sports and entertainment city and will serve to inspire generations of fans as a showcase for state-of-the-art technology products and services to deliver world-class fan experiences."

A professional services contract calls for Johnson Controls' products, services and solutions used within the Hall of Fame Village including the museum. This will provide for the creation of a showcase "smart city" with the company providing its building management systems, HVAC equipment, fire and security systems and other technologies that will assure world-class environments and yield significant operational cost savings over the life of the agreement.

"Our innovative, integrated, technologies will provide the right combination of safety and security at the Johnson Controls Hall of Fame Village in an environment that demonstrates how we connect 'cities' that run smartly and reliably," said Kim Metcalf-Kupres, vice president and chief marketing officer, Johnson Controls. "We are proud to celebrate the greats of the game who are enshrined in the Hall of Fame and create a winning experience for visiting fans."

Johnson Controls Hall of Fame Village is the largest project currently under construction in Ohio and will be a top tourist destination for millions of visitors per year. It is projected to bring $15.3 billion dollars in economic impact to the region in its first 25 years as it transforms the Pro Football Hall of Fame's campus to impact the lives of people by focusing on programming rooted in values learned from the game of football – commitment, integrity, courage, respect and excellence.

The Pro Football Hall of Fame is an independent 501 (c)(3) not-for-profit institution. The NFL Hall of Fame Committee is chaired by Dallas Cowboys Owner, President and General Manager Jerry Jones and provides guidance and leadership to the Hall of Fame with a focus on the Hall's Mission to "Honor the Heroes of the Game, Preserve its History, Promote its Values & Celebration Excellence EVERYWHERE."

"Today's announcement is a terrific day for the Pro Football Hall of Fame. The Hall of Fame's growth is great for this game and the millions of fans who love it. I'm thrilled that a company like Johnson Controls chose to be part of this very special project taking shape in Canton," stated Jones.

"This is one of the most outstanding projects with which IRG has ever been involved. We are very excited to join forces with a distinguished and innovative company like Johnson Controls to create the first-ever state-of-the-art and world class sports and entertainment 'smart city' around America's most passionate sport," Stuart Lichter, president and chairman of the board for Industrial Realty Group said.

"This partnership for the first-ever sports and entertainment 'smart' city is historic and far reaching. Johnson Controls' commitment to Hall of Fame Village will not only have a positive impact on our project, but on our community and region, as well as the game," commented Pro Football Hall of Fame Board of Trustees Chairman Randy Hunt.

The agreement ranks in the top 80 percentile of sports naming rights deals and is the largest ever for the market size.

Johnson Controls retained IdeaQuest, Ramsey, N.J., led by Founder & President, Eric Bechtel to help establish and activate this monumental partnership. The Hall of Fame retained Premier Ventures, Los Angeles, Calif., to advise them on various activities within the nearly $600 million Johnson Controls Hall of Fame Village development project including the negotiations related to this agreement led by Jeff Marks, president and co-founder. In addition, TSAV, a global technology consulting and integration firm, was retained to provide guidance and leadership regarding technology systems integration & realization of the overall vision for a first of its kind connected sports & entertainment smart city.

The not-for-profit Pro Football Hall of Fame is a shrine to the game of football, the National Football League and an accredited Museum, Library and Archival Research Center. It is a majestic diamond at the heart of Johnson Controls Hall of Fame Village.  Other  components  of  the  project  include  Tom  Benson  Hall  of  Fame  Stadium  for  sports  &  entertainment;  a  Center for Performance & Safety;  The Center  for  EXCELLENCE  (for  the  training  of  performance  athletes,  a  Coaches  University,  an  Institute  for  the  Integrity  of  Officials  and  an  Academy of  Corporate  Excellence);  a  1,400-seat  Symphony  Hall;  a  football  themed,  Four-Star  Hotel  &  Conference  Center; as  well  as  retail,  restaurant,  office  and  residential  support.  There will also be a place for fans to enjoy a permanent location for the Johnson Controls Hall of Fame Experience. Legends Landing, a senior care facility for retired Hall of Famers and members of the NFL's Legends Community along with coaches, officials and administrators will also be a part of Hall of Fame Village.