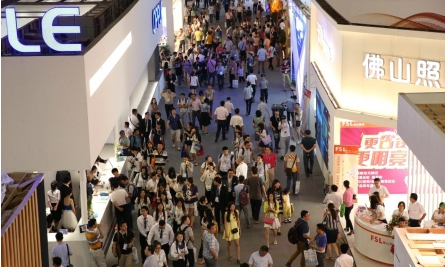 More international than ever before – every second visitor from outside Germany

Light + Building has once again confirmed its position as the world’s leading trade fair for lighting and building-services technology. The world’s biggest event for lighting, electrical technology and home and building automation closed its doors today after setting new records. Growth was recorded in all important indices – in the number of visitors, the number of exhibitors and the area occupied.

2,589 exhibitors (2014: 2,495*) from 55 countries launched their new products onto the world market on around 248.500 square metres of exhibition space (2014: 245,000 square metres*). A total of 216,000 trade visitors (2014: 211,232[1]) from 160 countries made their way to the Exhibition Centre in Frankfurt am Main from 13 to 18 March 2016, to discover innovations, solutions and new products. This represents growth of 2.3 percentage points. “We are extremely pleased with this year’s Light + Building and delighted with the further increase in the indices. This underscores the significance of Light + Building as the world’s leading trade fair for lighting and building services technology, as well as the positive mood in the sector and the on-going high level of exhibitor satisfaction”, said Wolfgang Marzin, President and Chief Executive Officer (CEO) of Messe Frankfurt.

The level of internationality also rose in comparison with the previous event: 67 percent (2014: 63 percent) of exhibitors and 49 percent (2014: 47 percent) of visitors came from outside Germany. The best-represented visitor nations after Germany were Italy, The Netherlands, France, United Kingdom and China. Considerable growth was also noted in the number of visitors from Spain and East European countries, such as Poland, the Czech Republic, Hungary and Romania, as well as from Turkey, India, Morocco and Iran.

For the industry, a large proportion of visitors from outside Germany is important for giving the fair a positive rating. Thus, Dr Klaus Mittelbach, Chairman of the German Electrical and Electronic Manufacturers’ Association (Zentralverband Elektrotechnik- und Elektronikindustrie e.V. – ZVEI), said, “Light + Building 2016 came up to the high expectations of the ZVEI exhibitors: digitalisation, networking and energy efficiency were the key issues in all halls of both the lighting and the building-services sectors.

As in the past, German artisans made up one of the largest groups of visitors. Ingolf Jakobi, General Manager of the Central Association of the German Electrical and Information Technology Trades (Zentralverband der Deutschen Elektro- und Informationstechnischen Handwerke – ZVEH) underscored the importance of Light + Building as an extremely valuable platform for the electrical trade: “Intelligent building networks and energy efficiency are inextricably linked in this age of digitalisation. Both themes – and, therefore, the expertise of the electrical trade in these fields, were more in focus than ever before at Light + Building.”

The spotlight of this year’s Light + Building was on digitalisation. Accordingly, the motto of the fair was, ‘Where modern spaces come to life: digital – individual – networked’. The industry showed intelligent solutions and future-oriented technologies revolving around digitalisation and networking, as well as the latest design trends. In this connection, the focus was not only on trends in the lighting market and the influence of light on people but also on networked safety and security, intelligent home and building automation and efficient energy management. These key issues were also taken up in the multi-faceted complementary programme and enlarged on in expert lectures.

Light + Building goes City: during the evenings, Luminale created a link between the fair and the city. Concurrently with the world’s leading trade fair for the sector, the Biennale of Lighting Culture presented over 200 unique lighting installations in the Rhine-Main region. This year, the ‘urban lighting laboratory’ attracted almost 200,000 people. The combination of trade fair and metropolitan experience transformed the Rhine-Main region into a unique meeting place for everyone interested in lighting and, for the eighth time, presented an unrivalled opportunity to see architecture ‘in a new light’ and fascinating lighting concepts in the urban landscape.

Further information and images for downloading can be found in the ‘For Journalists’ section of the Light + Building website at www.light-building.com