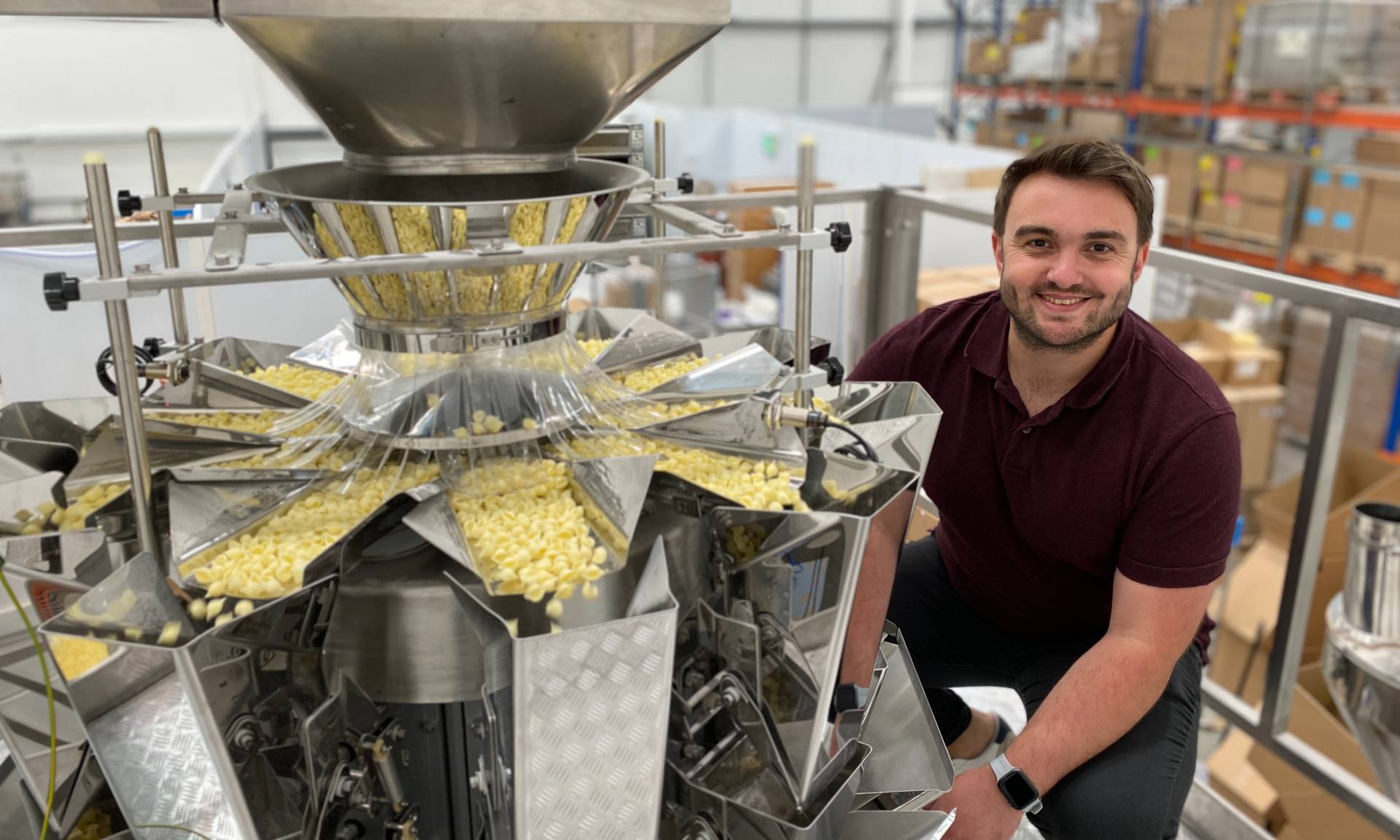 A specialist food manufacturer has experienced a 10-boost in productivity and is forecasting a 30% increase in turnover after investing in automation technology with the support of Made Smarter.

Firstplay Dietary Foods, based in Stockport, makes a range of low protein products for people with metabolic conditions like Phenylketonuria (PKU) which leave people unable to eat protein without risking brain damage.

With a growing international demand from patients and dieticians, due to the increased number of countries delivering newborn screening, the business has invested £120,000 in new digital machinery, increasing its blending capacity, while replacing a manual weighing and packing process with automation.

As a result, the business has increased production capacity 10-fold, reduced human error and waste, and is forecast to increase turnover by 30%.

In addition, two operators are now focussed on more value-add activities such as sales and complex packing tasks.

Tom Fletcher, Managing Director, said: “Our growth has been organic with only occasional investment to update our production processes.

“Our partnership with Made Smarter changes that. We have a long-term strategy and a digital roadmap to follow to achieve those goals. My only wish is that we had done it sooner.

“By replacing a manual low-skilled task with automation, we are able to do much more with the resources we have, as well as upskilling our existing staff, which to a small business is extremely valuable.”

Firstplay was established in 1993 by Steve and Linda Fletcher to help people living with PKU, an inborn error of metabolism which affects roughly 1 in 10,000 people in the UK.

Over the decades the business has grown steadily, innovating its product range to include dried pasta, flavoured pasta sachets, breads, baking mixes, snacks and soups, for an increasing global market.

With ambitions to target emerging markets in China, tthe Middle East and America, Firstplay needed to address its manufacturing productivity and efficiency challenges.

But a key bottleneck in the production process was the manual weighing and packing of certain products which had a limited capacity of about 600 packets per day, and was open to errors and waste.

With grant support from Made Smarter, Firstplay invested in a powder packaging machine, which includes an automated multi-head weigher and powder filler. It works by loading the product through a hopper, digitally weighs and corrects the amount of product, and then dispenses and seals it into a bag before delivering it for boxing.

The new equipment also introduced a live data feed, giving management real-time overview of variables such as the running speed of the equipment, total giveaway, and average weights over the course of a shift.

The outcome has been transformative, increasing the number of sachets it can produce from 600 per day to 6,000 sachets per day.

Digital process control means that packets are more consistently filled, improving quality and reducing waste, both in time and in packaging materials.

With a roadmap to digital transformation in hand, Firstplay is now exploring a series of projects including data and systems integration technology to link its new machinery with a barcode scanning system for stock control, and implementing business and production software for better data analytics to improve production efficiency.

Donna Edwards, Made Smarter’s North West Adoption Programme Director, said: “We are delighted to be supporting Firstplay on the first stage of its digital transformation. It is a  fantastic example of a business using technology to automate a process, creating growth and upskilling existing roles, while laying the foundation for further improvements.

“Firstplay is among hundreds of manufacturers in the region grasping the opportunities offered by Made Smarter which include expert, impartial technology advice, digital transformation workshops to help take that first step to transform a business, and support with technology investment. I would encourage other SME manufacturers to do the same.”